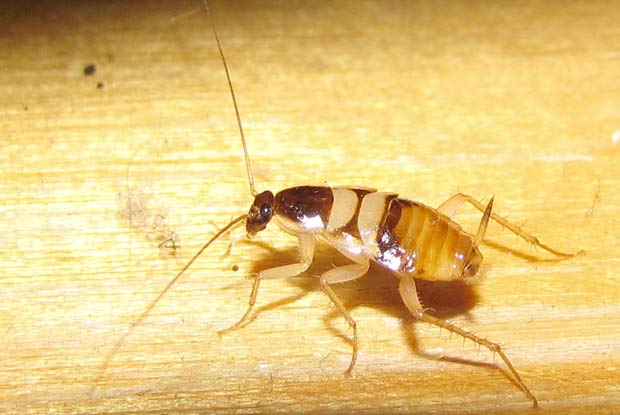 What is a Brown-banded cockroach?

Brown-banded cockroaches get their name from the two lighter bands they have across their dark brownish bodies. In addition to the distinctive banding, males have full wings, which reach beyond the tip of their rather pointed abdomens, but females have underdeveloped wings, much shorter than their broad, rounded abdomens. The lighter band markings are much more distinct in nymphs than in adults of either sex. They grow to 2 inch long.

Cockroaches have been reported to spread at least 33 kinds of bacteria, six kinds of parasitic worms, and at least seven other kinds of human pathogens. They can pick up germs on the spines of their legs and bodies as they crawl through decaying matter or sewage and then carry these into food or onto food surfaces. Germs that cockroaches eat from decaying matter or sewage are protected while in their bodies and may remain infective for several weeks longer than if they had been exposed to cleaning agents, rinse water, or just sunlight and air. Recent medical studies have shown that cockroach allergens cause lots of allergic reactions in inner city children. They were even shown to cause asthma in children. These allergens build up in deposits of droppings, secretions, cast skins, and dead bodies of roaches.

Give us a call today at 503.720.8559 to learn more about Brown-banded Cockroaches or to schedule an inspection!