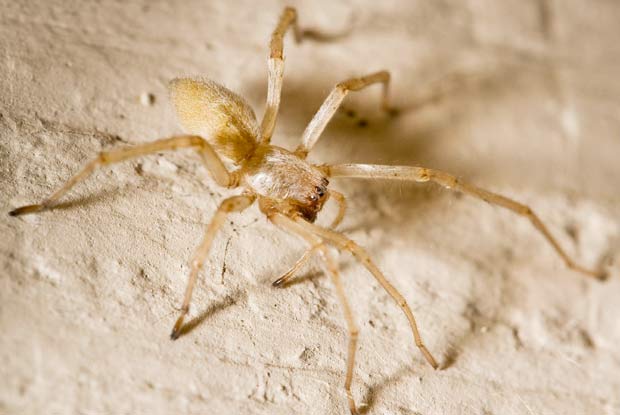 What is a Yellow Sac Spider?

Yellow Sac Spiders are relatively small (10 mm body length), and are yellowish in color; they are difficult to distinguish from one another.

Some yellow sac spiders are attracted to the smell of hydrogen oxide in gasoline. An unusual double pipe configuration in the Mazda6 led to a recall of around 65,000 Mazda vehicles in the US, Canada, Mexico and Puerto Rico from the 2009-10 model years after it was found that yellow sac spiders were building nests in the fuel line of the vehicles.

In the autumn the food is disappearing and the yellow sac spider moves indoors to find food. Indoors it is often seen on walls and around different constructions. If disturbed it drops to the floor. Egg sacs are laid in corners of all sorts. The egg sacs are white and spunk with silk. The female may guard its egg sac one way or the other so one has to be careful removing egg sacs from a yellow sac spider.

During the summer when there’s plenty of food the yellow sack spider prefers to live on trees, shrubs, and in low vegetation close to open expanses, such as fields. Occasionally it’s found in cotton crops.

Bites generally produce instant, intense stinging pain, not unlike that of the sting of a wasp or hornet. This may be followed by localized redness, swelling and itching; these manifestations may or may not evolve into a necrotic lesion, but when that occurs healing is usually complete within eight weeks. Side effects may include chills, fever, headache, dizziness, nausea, anorexia, and sometimes shock.

Give us a call today at 503.720.8559 to learn more about Yellow Sac Spiders or to schedule
an inspection!