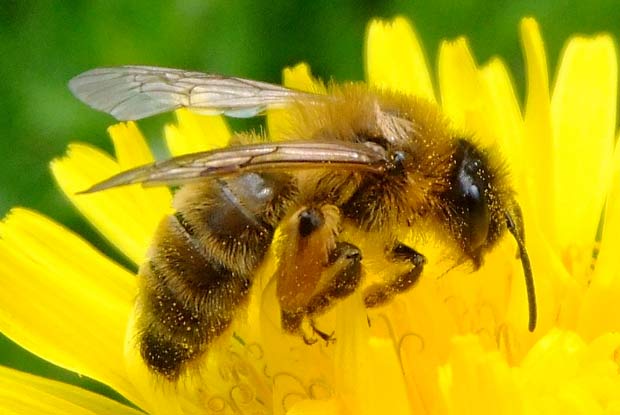 What is a Honey Bee?

One of the most familiar insects in the world is the Honeybee. This member of the insect order Hymenoptera plays a key role in the human and natural world.

Honey is a thick liquid produced by certain types of bees from the nectar of flowers. While many species of insects consume nectar, honeybees refine and concentrate nectar to make honey. Indeed, they make lots of honey so they will have plenty of food for times when flower nectar is unavailable, such as winter.

Unlike most insects, honeybees remain active through the winter, consuming and metabolizing honey in order to keep from freezing to death.

Honeybees have a bright color pattern to warn potential predators that they have a weapon to defend themselves. Their weapon is a modified ovipositor (egg-laying tube). This is combined with a venom gland to create a stinger (formally known as an aculeus) located at the end of the abdomen. Because the stinger is modified from a structure found only in females, male bees cannot sting. When the hive is threatened, honeybees will swarm out and attack with their stingers to drive the enemy away.

When the Queen returns she may be fertilized for life, which is many years. She’ll command some of the excess bees in the colony to leave with her. The swarm is sudden and in extremely large numbers. Some customers have been quoted as saying “The sky got dark because there was so many bees!!!!” We doubt the sky got dark, but you can understand what we mean. Depending on the weather and other environmental conditions you could expect this to happen in May or June.

We advocate handling, removing, killing or otherwise dealing with wild Honeybees if they become a threat to people or move into your house. If they build a colony in your home they construct a honeycomb at an alarming rate. Studies have shown honeycombs being built at a rate of almost one pound per day for several days in a row. The nest will eventually get up to around 30 pounds and maybe more. Yes that’s right, all that in your walls! We have the skills and expertise to carefully remove these from people’s walls.